Sunday, the Britannia Cup saw the conclusion of the ISU categories with the Junior and Senior Free Programme and Advanced Novice. It was an exciting event with some beautiful skating across the board.


Senior: great attack and sass from the Haydenettes!
The Senior category’s placings were consistent with Saturday's short programmes, showing no movement.

The stand out winner was Haydenettes from the USA who scored 135.09 points in the free, making a total score of 206.66 points. They skated all in black to various INXS tracks with great attack and sass. They had one fall after a lift and were downgraded in their whip intersection but this was barely noticed by the crowd who were enjoying their performance. Their twizzles were particularly impressive with the speed and ice coverage entailed.

In second place, also from the USA was Adrian College Varsity. They earned 119.23 in their Free Programme which gave them 171.90 in total. Their programme was made up of music which represented the different seasons and this was reflected in different coloured leaves on their costumes. They skated a clean programme and interpreted the different music well.

In third place from Italy was Hot Shivers. They scored 108.87 points in the Free Programme which earned them 157.94 points altogether. They skated in light blue costumes with multicoloured balloons representing their music from the film Up. A particular highlight was in their concertina like pull through to change positions in a block formation. They earned level 4s in three elements.

In 4th place from Great Britain was Icicles. They scored 73.62 points in their Free Programme which earned them a total of 109.79 points. Skating in vibrant pink costumes, they sampled various 1970’s disco mega hits in an energetic programme. They looked like they really wanted to hold onto their Championship title as they threw everything at this programme and it paid off.

In 5th place from Great Britain was Team Zariba. They scored 58.13 points in their Free Programme which scored them a total score of 87.05 points. They skated to a 1940’s themed routine which included some interesting lifts.

The junior category continued in the afternoon with the nine teams completing their free programme. Again, the teams from the USA dominated this category.

In first place was Skyliners from the USA scoring 176.15 points overall. Their Free programme was skated to Moulin Rouge and they wore extremely sparkly gold and red costumes. Despite a fall in the Moves Element, they gained 3 elements at a level 4 and the choreography of their programme was a delight to watch. They scored 112.28 points putting them in second place in the free but first overall.

In second place was Team Starlights from the USA who scored 168.77 points overall. The crowd was very excited to see them and USA chants were out in force. Sky blue costumes completed their Cinderella inspired programme. They had very quick transitions and made good choreographic use of the light and floaty waltz. They gained 5 elements at level 4 and scored 113.28 points, placing them first in the free but second overall.

In third place from the USA was DC Edge who scored 150.89 points overall. This team is a comparatively new team, having only formed in 2018 and they are making their way up the rankings. Their programme was an original concept of a conductor and his orchestra with one girl dressed differently to reflect this. There were some lovely inflections in the music, especially in the Artistic Line and Synchronised Spin. They gained 4 elements at a level 4 and scored 99.37 points, putting them in third place.

In 4th place with a total score of 130.46 points was Hot Shivers from Italy. They skated to the Lion King in a dramatic performance which the audience enjoyed and were very happy with their performance. They gained 3 elements at a level 4 and scored 84.55 points in the Free Programme.

Team Estreija from Finland were in 5th place with a total score of 128.69 points. With vivid green costumes to What a Wonderful World and Matt Fax, they had some nice features which were perfectly timed with the music. They earned 3 elements at a level 4 and scored 83.71 in the Free Programme but suffered from several deductions due to falls and ice coverage in the Moves Element.

Team Estreja from Finland finished 5th in Nottingham this weekend. (Credits: Kirsi Laine Photography - 2019)
In 6th place was Icicles from GBR who had a total score of 104.65. They skated to a range of circus inspired music and their choreography was well matched with the theme. They pleased the crowd with their signature skirt flick in the Pivot Block and they kept in character throughout their performance. Their spins were fast, earning them a level 4 and their Moves Element also earned them a level 4. They scored 75.69 points, placing them in 6th place, top 2 places from the short programme.

7th place was taken by Les Chrysalides from France who scored 98.25 points in total. This team suffered from a problem with their music which switched off part way through their routine. They carried on to the end with no music and headed to the Kiss and Cry area very disappointed. After a long wait, they were allowed to come back on and pick up their routine where the music turned off and they performed with passion. The crowd was behind them all the way and despite several deductions for falls and ice coverage, they moved up a place from the short programme earning 65.28 points.

8th place was taken by Solway Stars from GBR who scored 94.96 points in total. They skated in purple to Danny Elfman in a very balletic inspired routine. They scored 63.36 for the Free Programme.

9th place went to Team Illuminettes from the Netherlands who scored 88.43 points in total. Skating in purple costumes to Alice in Wonderland, they had a drama filled routine. They earned a level 4 in their Moves Element and scored 61.99 in their Free Programme.

The young skaters of Diamond Edges (FIN) showed already great skills. (Credits: S.J. Photos - 2019)
Advanced Novice had three competitors from Finland and Britain and the competition for the top spot was very close.

Diamond Edges from Finland took the gold, scoring 74.33 points, just 0.1 points above their competitor. They had "Día de Muertos" inspired costumes and showed great flow and speed consistently across the ice. Their Moves Element was extremely strong, earning a level 4 with fm3 along with excellent twizzles, gaining a level 4. It was a very strong performance notwithstanding 3 falls.

In second place with 74.23 points was Valley Bay Synchronics from Finland. They had an intricate programme filled with creativity. The music was reflected by the choreography but also, equally, by the skaters themselves in how they performed the programme. Each element was well executed, and they gained a level 4 in their Moves Element and Travelling Circle.

In third place was Ice Dreams from GBR who scored 50.50 points to a Bring It On inspired programme. They attacked their programme with enthusiasm and they embraced their theme with their choreography and their presentation of the elements. There was plenty of speed and flow across the ice. 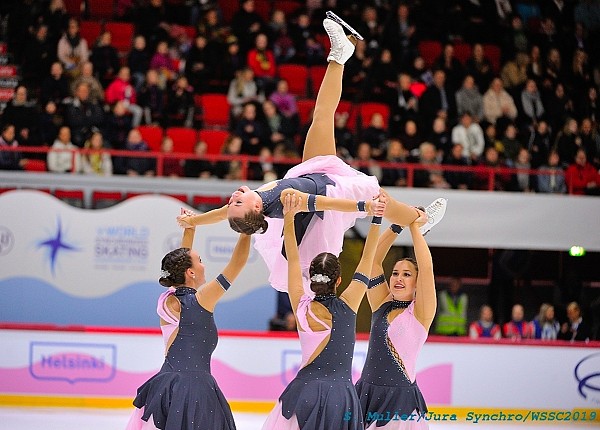 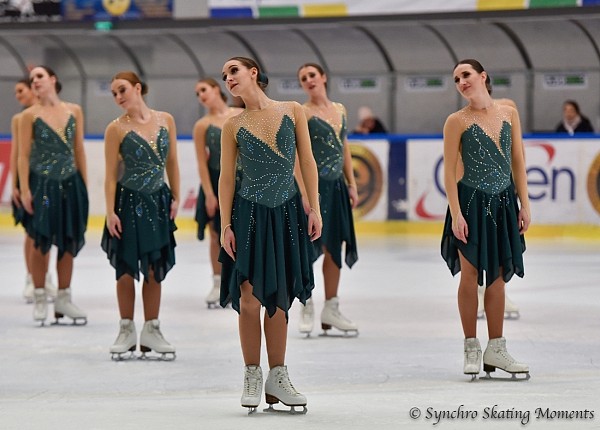 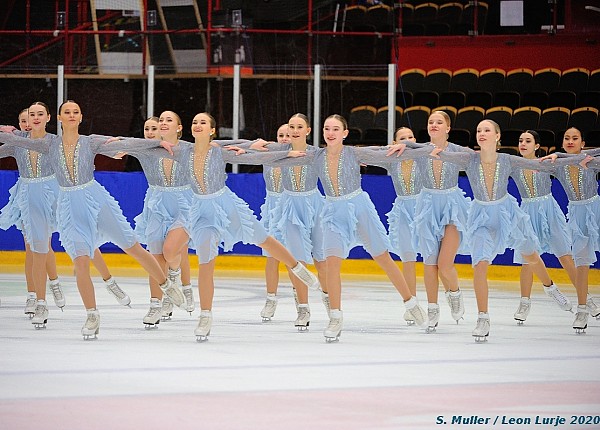