The Senior Team Ice On Fire brought home gold from the first national competition in Italy, leaving the silver medal to Hot Shivers. Many other ISU and Non-ISU teams competed on Sunday the rainy Aosta and put out creative performances.

In the Advanced Novices division, Hot Shivers delivered a clean program, as usual with elegance and precision, to Mary Poppins and won the competition. Lady Birds, mixing their poisoned potions, got the silver medal. Team Ice on Fire took the bronze.


Some surprises in the Junior and Senior events
In the Junior category, Hot Shivers claimed the gold medal with a total score of 122.31 points running an emotional program to the soundtrack from "The Lion King". They are followed by Shining Blades that got a total score of 99.05 points.

Now, it is time to talk about the Senior category where we had a huge surprise from Team Ice On Fire. The skaters from Trento obtained 41.26 points in the short program and 93.48 points in the free program for a total score of 134.74 points. Ice on Fire started the season leaving everyone speechless, and now with this victory in Aosta, they confirm their great form.

The famous Hot Shivers dropped from first to second, and finished with the silver medal. The National champions and Team Ice on Fire had both a fall in the short program. In the free skate, Hot Shivers fell three times and Ice on Fire, one time.

The third position went to Shining Blades that got a total score of 80.18 points.

These three teams are competing to qualify for the World Championships. This season, Italy will be able to send two teams in Lake Placid in April.

Juvenile and Mixed Age
The local team Ice Sparkles skated to the lead in the Juvenile category. Eight nice skaters dressed in a blue costume obtained a total score of 24.21 points, followed by the Ladybirds team from Milan (total score: 22.77 points).

This season in Mixed Age, Italy has two new entries coming from the Junior ISU category: Flying Angels from Rome and Ice Diamonds from Chiavenna. This situation can be explained by the lack of regular ice rinks that makes this sport difficult to practice in the country.

Nevertheless, in the Mixed Age category, the first place went to Flying Angels that earned a total score of 36.90 points. They skated to the music of "Pearl Harbour" expressing the themes of war and love. Ice Diamonds finished second and skated to "The Huntsman Winter's War" (36.02). Frost Fairies took third place with a total score of 34.52 points.

Junior B
Three teams competed in this field. The first place went to Crazy Splinters from Rome. This team did a great performance with their "Aladdin" program and totaled a score of 36.34 points. The Ladybirds came second with a total score of 30.98 points, running their new Burlesque program. Ice Sparkles got third place (27.94). They skated their free program to a Eurythmics's medley.

Adults
Two teams competing in this category; Sunrice Gold got the first place and Ladybirds claimed the silver medal. The presence of these two teams confirms the fact that synchro is a discipline that always conquers the public and allows to develop new passions at any age.

I am 15 years old I live in Rome and I am doing my second year at the high school. I practice ice skate since I was 5 y.o and two years ago I was practicing artistic skating, but after I have decided to change and try the experience of the synchro skating. I really loved this sport, because I work in a team, we have to do the same things at the same time, we have to skate like if we are just one person. It is difficult to do this sport in Rome cause our ice rink is very very small but every day we are doing the best to be the best… Something funny about me is that since I started to skate, I was dancing the whole day, in the road, at school, in the bus, in my room… everywhere! Everyone was looking at me when I was dancing because it was funny to see a little girl dancing like a professional dancer. 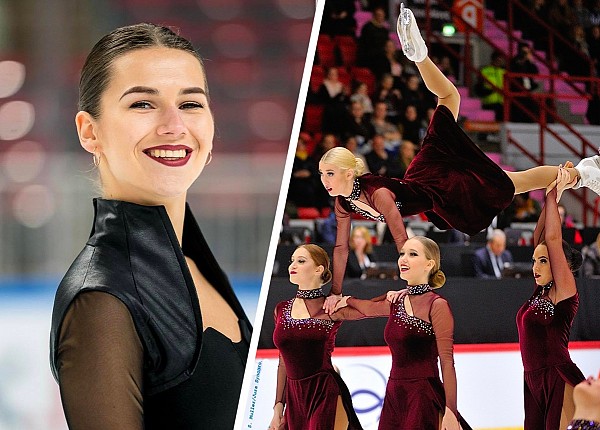